This blog is for you, the native or transplanted desert dweller. Our harsh and varied desert climates continually present a challenge for gardeners. Those of you who have moved from a colder climate such as the mid-west or New England, you have most likely tried to find container gardening information that tells you how to grow the kind of garden like you had 'back home.'

Search here to find answers to your potted garden questions.

A Different Way to Get Potted with The Contained Gardener

A new client - let's call her Wanda had come to one of my potted gardening classes last fall. Last month she took advantage of the certificate I had sent her to have me do a consultation at her home for $100 instead of my usual fee of $125.
During that visit, we talked about where she would like to have pots and pockets of color. I designed a pot layout for her and in our conversation, she said she would really like to do some of the work herself. Our next step was to go pot shopping!
Yesterday we did just that. We went to Pottery Blowout and Glazed Expressions and Wanda chose and purchased eight new pots! While at my studio, we were discussing the design for the floral combinations for her pots and although she wants to do the planting herself, she had asked me to design the plantings.
I suggested that I not only design the plantings for her new pots but that I obtain the flowers and she can pick them up from our yard when they come in, take them home with enough soil and with the written plan, have her family help plant them!
I think Wanda is going to save quite a bit of money by "Getting Potted' with us this way. She and her family are not hesitant to put in the work and she will still end up with a designed patio worthy of her beautiful home!
Come back to visit and I will show you some pictures of the results!
Posted by The Contained Gardener - Tucson, AZ at 6:22 AM No comments: 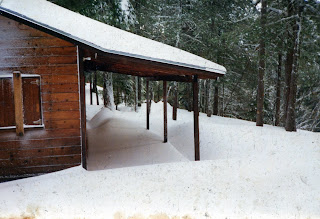 What happened to our plants in our February, 2011 “Arctic Freeze’
In our desert climate, we do not have cooling temperatures during the winter that put our woody plants (trees and shrubs) into a true state of dormancy. When a plant does go into full dormancy, it develops freeze tolerance. Just as we are not very tolerant of freezing temperatures, nor can our plants be tolerant!
As our temperatures drop well below freezing and stay low for a period of time as they did in February, ice crystals form inside the cells. These intracellular ice crystals rupture cell membranes, resulting in leakage of the cell contents. Thus, tissues injured by low temperatures often appear water-soaked and are flaccid.
The Relationship between a Full Moon and a Frost – not science-based proof!
1.      If a warm air mass is on top of us, it holds the heat in and we typically will not get a frost.
2.      The heat of the sun is reflected by the moon.
3.      Frosts are more likely the closer we are to a full moon, because the heat reflected by a full or nearly full moon is enough to evaporate the water in the upper atmosphere that otherwise would have reflected the sun’s heat back to earth. When the water evaporates, heat escapes and the air gets colder.
However, many of those on the Internet that have looked at this issue are known to say, when it's clear you're more likely to see them.
And now that you are getting around to reading this, I expect the danger of any substantial frost or freezing in the area is over. Before you know it, we will be talking about how hot it is!!!
Posted by The Contained Gardener - Tucson, AZ at 11:37 AM No comments:

Check back early next week for more information

Thank you for checking in - I hope you arrived here from my most recent Potted E-News! I am planning to complete all the added information that I spoke of in this issue early next week.

Can you do me a favor and check back on Tuesday? By then too, we will know the long range forecast and be ready to do some serious pruning!!

Thanks again! Have a great weekend!
Posted by The Contained Gardener - Tucson, AZ at 10:46 AM No comments:

The Contained Gardener - Tucson, AZ
Tucson, AZ, United States
Our harsh and varied desert climates continually present a challenge for gardeners. Those of you who have moved from a colder climate such as the mid-west or New England, you have most likely tried to find container gardening information that tells you how to grow the kind of garden like you had 'back home.'